The Mary Penrose Wayne Chapter, NSDAR, was organized on December 18, 1901, and was the eleventh chapter formed in Indiana. Mrs. Frances M. Haberly Robertson was elected organizing regent of the chapter, which had twenty-two charter members. The National Society issued charter number 561 to the chapter on January 9, 1902. Colonel Robert Robertson, the regent's husband, framed the charter with wood from the fortifications of the fort dedicated in Fort Wayne by General Anthony Wayne on October 22, 1794.

Members selected the chapter name to honor the wife of General Anthony Wayne. Mary Penrose was the youngest of five children born to Bartholomew Penrose, Jr., and Mary Kirl. Mary Penrose, often called "Polly," was born around 1749. She met Anthony Wayne at a military ball in Philadelphia. 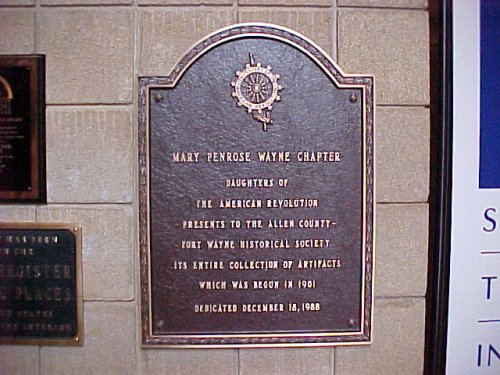 After a brief courtship, Anthony Wayne and Mary Penrose were married in 1766 at Christ Church, Philadelphia. Daughter Margaretta was born in 1770, and son Isaac was born in 1772 at their farm, Waynesborough, in Chester County, Pennsylvania. During the Revolutionary War, Mary managed the Waynesborough property and a tannery. The approach of British soldiers often endangered the family and property.

According to the Isaac Wayne family bible*, Mary was forty-four years old when she died at the family residence on April 18, 1793. She is buried in the cemetery of St. David's Episcopal Church, Radnor Township, Delaware County, Pennsylvania. Anthony Wayne died December 15, 1796, at Presque Isle on Lake Erie. In 1809, his remains were moved and buried in the Wayne family plot at St. David's at Radnor. A large monument marks his resting place.

*This bible is in the collection of the Allen County Public Library, Fort Wayne, Indiana.